The 3 Major Revelations About David Foster Wallace Gleaned From DT Max's Biography, Every Love Story Is A Ghost Story, For The People Who Are Considerably More Well-versed in Wallace Than Those With Just a Casual Interest in Him 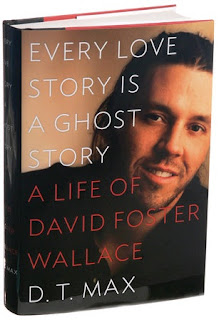 If you're like me—and I suspect there're more of you out there than one might think—you've been eagerly awaiting D.T. Max's bio of David Foster Wallace ever since it was excerpted in The New Yorker 3.5 years ago. And you've also, like me, read and re-read all of Wallace's published output. You've even tracked down his unpublished stuff, and are rather blasé about the impending release of Both Flesh and Not, a volume of previously uncollected work, because you're pretty sure you've read it all. (Which doesn't mean you won't get it on release day and read everything again, gratefully.) You own multiple copies of Infinite Jest. You follow Nick Maniatis on Twitter and compulsively click on every link he deems tweet-worthy. You own the Charlie Rose interviews on DVD. You have 9 hours of DFW interviews on your iPod, 3.4 hours of readings (not including audiobooks), 4.4 hours of tributes and remembrances. You've torn out the pages of a yard sale copy of IJ so you could put the story in chronological order.
So, if you're such a person, a self-admitted DFW nut, does Max's book have any juicy new nuggets to offer you, anything you didn’t already know? Well, there are a couple things, but nothing too major. The simple fact is that if you've read all the books and all the interviews and all the tributes (and listened to all the audio tributes and radio interviews, natch) and have gone through all the supplemental material like the Conversations With book and Lipsky's Although Of Course... and Boswell’s Understanding and Carlisle’s Elegant Complexity and both editions of Stephen Burn’s IJ companion, and have even watched stuff like that hour-long videotaped interview with Bonnie Nadell and all the videos of the Ransom Center symposia on YouTube, if you’ve done all that, well, Max's bio is going to cover a lot of familiar ground for you. There are some things in Every Love Story you can tell would be new and interesting for the casual reader, but you end up kind of skimming a lot of it because when, for example, Max does stuff like quote from a syllabus from a Wallace-taught class, you not only recognize the words, you've seen scans of the actual syllabus.
The best part of the book by far is when Max quotes from Wallace's letters. (Well, when he quotes from letters you haven't already read/heard other people read aloud/seen scans of.) Wallace was an inveterate writer of letters and apparently there are copious amounts of epistolary correspondence; Max had some 850 pages of Wallace-penned letters at his disposal. (It seems he wrote to DeLillo about pretty much Everything, from writing tips to problems with his publisher to buying a new house.) The letters are written in DFW's familiar (and therefore comforting) voice; he wrote them with the same intelligence, wit, and insight with which he wrote gosh darn near everything. (In that respect he rivals Fitzgerald for having never ever written a weak sentence. Like, ever. [apologies to TS]) When a volume of his letters is eventually published, it will be a true event, and pretty close to Holy Grail-type material for Wallace fans—rivaled perhaps only by a facsimile of the handwritten IJ manuscript or "Author's Cut" of IJ with hundreds of pages of restored cuts (one of the amusing tidbits in the bio: Michael Silverblatt called up Pietsch to see if he could read the IJ outtakes).

I will say that Max's bio is a nice compendium/repository of most of the available info out there and is especially helpful in the chronology dept (when exactly Wallace wrote/published a certain story or essay, where he was living at the time, etc.). I liked it and I recommend it, and I hope this endorsement isn't attenuated by the fact that I like reading really anything about Wallace; Every Love Story is a legitimately good biography. (Though one little cavil: There's no account of the publication of The Pale King. Max takes the uncompromising view that the story ends on Sept 12 2008, and most of the last 15 pages or so seem to be taken verbatim from his New Yorker article. Which is ultimately fine (after all, most of the Pale King info is out there if one wanted to track it down) but I was reading Every Love Story on a Kindle and didn't realize that there were 50+ pages of endnotes, sources, and appendices (an index? Really? In this day and age?), and so when I came to the end (only 74% of the book, according to the progress bar), I fully expected at least a couple dozen more pages, making the ending for me far more abrupt and aposiopetic than the ending of Infinite Jest is accused of being.)

Anyway, onward with the big reveals for even the DFW cognoscenti...

1. The essays were largely made-up

Grumblings about the veracity of the events in Wallace's non-fiction have been building over the last year, and it turns out with good cause. While the essays' jumping-off points remain verifiable (He did go to the State Fair, he did go on a cruise, etc.), the details contained within are probably at the very least exaggerated. There's no way of fact-checking every little thing, but Max does an admirable job of uncovering when authorial liberty was taken, pointing out when anecdotes were invented or stolen wholesale from another's experience. I didn't mind this revelation too much since I've always considered Wallace’s non-fiction less important than his fiction. And frankly, it does explain how, in those essays, everyone around him had a knack for doing/saying the exact right thing, constantly. But I can imagine the people who unreservedly love his essays getting their hackles raised as Max systematically shoots down or casts doubt on their favorite bits (the pinwheeling batons? Most likely exaggerated. The little girl chess prodigy who knew what “fianchettoing” was? Probably didn’t exist). For me, the most disappointing fudging Max points out is that Wallace didn’t belong to a church group, a group that reportedly also had as a member the person whose house Wallace casually strolls into Kramer-like in the essay “The View From Mrs. Thompson’s.” Granted, the dissimulation here wasn’t done for arbitrary or aesthetic reasons; the people in the essay were actually members of his recovery group, so their anonymity (and, by extension, his) was paramount. But still. It was one of those details it seemed the whole (not very long) essay hinged on: Watching the events of 9/11 unfold with members of your church. There was a whole other interesting layer to that essay that gets kind of stripped away now. (Wallace had to know how much more interesting the essay was with this invented detail. So notable was it that even Silverblatt went out of his way to bring it up during an interview.) This exposure dishearteningly casts doubt on all the other stuff in the essay. Think about that affecting story about his search for an American flag, the whole going to gas station after gas station, finally arriving at an out-of-the-way convenience store (that just happens to be owned by a Pakistani), making a homemade flag in the backroom. After reading Max’s book, it’s hard to imagine Wallace actually doing all that. It is, however, easy to imagine him writing about doing it.